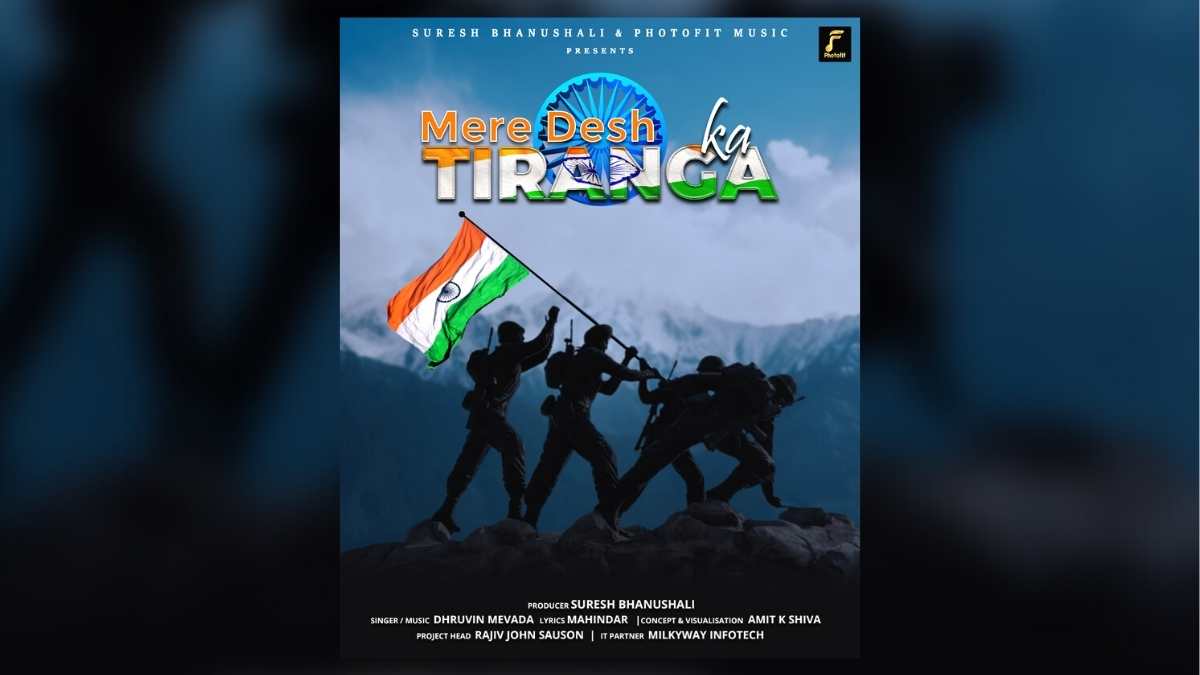 Our nation has completed 75 years of Independence this year. Producer Suresh Bhanushali and Photofit Music bring to us a heart-melting song “Mere Desh Ka Tiranga” to commend this patriotic day. Prime Minister Narendra Modi’s “Har Ghar Tiranga” initiative has also invoked the feeling of patriotism in the hearts of the people and to promote awareness about the Indian National Flag. With this note surely ‘Mere Desh Ka Tiranga’ this song will strike that patriotic chord in everyone. Photofit Music is one renowned and successful music label that has created its own space in the industry with its quality of work.

Producer Suresh Bhanushali adds, that we Indians always have feelings of patriotism in our hearts, and PM Modi’s new campaign “Har Ghar Tiranga” is truly a motivation for Photofit Music to create a patriotic song like this. Dhruvin Mevada was the right choice who added a fresh patriotic flavor to the song. He legitimized the song with his profound vocals. Moreover, we as Photofit Music have never missed creating a song on any important occasion. The previous patriotic song “Army” was released on Republic Day and gathered tremendous attention.

Mr. Amit K Shiva who has delightfully conceptualized and visualized has well depicted and framed the song “Mere Desh Ka Tiranga”. He additionally specifies, “I was always entranced with Bharat Bala songs and his songs were my inspiration for patriotic themes. He always implanted and motivated me for making a song on our nation. “Mere Desh Ka Tiranga” gives me enormous pride today. This beautiful song is soulfully crooned and composed by Dhruvin Mevada.

Mr. Rajiv John Sauson, Project Head, Photofit Music says, our rich heritage and tradition make our nation beautiful and this brings pride to being an Indian. The song “Mere Desh Ka Tiranga” draws out the true story of patriotism.

In addition, our freedom fighters who played an important role in the entire episode cannot be forgotten. They inspire and motivate us adds Mr. Rajiv John Sauson, Photofit Music. The song by Mr. Suresh Bhanushali and Photofit Music “Mere Desh Ka Tiranga” is such a powerful song and it has an innate sense of emotional patriotic feel, and we are proud to possess this song, adds Mr. Rajiv John Sauson.

The song is dedicated to our glorious nation and our people who contribute to the nation. Producer Suresh Bhanushali says, we pledge to protect our country and be proud and patriotic. It’s not only during special days like Independence Day however it’s always throughout.

The freedom that we enjoy in India can never be equalized by any other nation across the world. India is a land of emotions and our emotions bind us together. This is the imperceptible cord that pulls to the motherland. We love to be Indians and we will always be proud to be Indians concludes, Mr. Rajiv John Sauson.

This seamless and powerfully woven song will surely evoke that strong feeling of patriotism in everyone. This song is released on the official YouTube channel of Photofit Music.